Time for a closer look at the 4th phase – The Winter, or Crisis.

Our previous article (found here) explained a brief overview of a cycle in history known as a saeculum.  This 80 – 120 year period in history is made up of four (4) separate turnings.  Each of these turnings last on average 20 – 25 years.  We are now going to take a quick look at the types of people born in these turnings, and then take a closer look at just the Fourth Turning, since that is the one we are currently in.  We will also look ahead to a new founding.  What kind of founding?  That will be determined by the people of this great country during the next ten (10) or so years.

Let’s begin with a look at archetypes.  During each phase an archetype of sorts is born.  In general, these types of people will be born, but remember there are always exceptions.

Each archetype affects change in the next two phases following, when they are old enough to make a difference.  If you want to know which archetype you and your friends fit into, go to the previous article “The Fourth Turning – In a Nutshell” and find the year you were born.

Here is a breakdown of just one historical 4th turning in American history.

1770 – Boston Massacre – The Catalyst that pushes society into a 4th Turning.

1776 – Declaration of Independence – The alignment takes place.  In this case, the people aligned themselves with each other, and against the ruling power of England.

1783-1787 – Revolutionary War – The Crisis shows itself.  There is death, sacrifice, and extreme hardship on those who fight for the cause.

1787-1794 – The Constitutional Convention – The Resolution takes place.  A new founding is then created on self rule, in this case.

2001 – September 11 terrorist attacks – The Catalyst.  This drove our country to changes in policy.  Our attack was suddenly different, so our defense was changed.  Therefore policy changed to enforce the new defense.  i.e. Patriot Act, Victory Act, etc.

That’s what we know for sure about the 4th Turning.  If the cycles hold, this may be what we can come to expect.  And we have questions for you to ponder, seriously.

We cannot look back in time and wish for the “old days”, we must look forward to a future of freedom.  Take the steps necessary to tip the scales back toward the side of freedom.  We have lost for many years.  But we can reverse the direction of this country.  If we are to survive the 4th turning and come out with a founding that is of value, we must embrace it.  We must prepare for it.  We must be educated in freedom principles.

Wouldn’t it be great to just take a pill and have this thing fixed?  Unfortunately, that is not possible.  The fix is in long-term thinking, education, reform, and de-centralization.  These things take time.  This isn’t scary, it’s exciting.  We can change the course of our country.

Join us in the fight for freedom by dedicating yourself to move the cause of liberty forward.  Organize S.T.A.R. Forum groups in your own area.  The S.T.A.R. Forum is here to teach and assist you.  Email us, and we will send you updates automatically.  More information will continue to come forward.  We seek leaders in every city, who can influence others in liberty.  Freedom lovers everywhere…Unite. 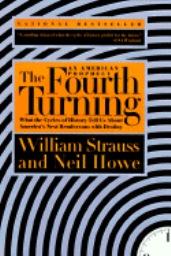 Based on the book “The Fourth Turning” by Strauss & Howe

And speeches by Dr. Oliver DeMille

Every 80 to 120 years (a saeculum) society goes through 4 phases.  Just like the weather.

There is always a catalyst to push you from a 3rd turning to a 4th.

Now, you don’t have to take my word for it.  Just go back through history, say 300 generations, or the last 3,000 years and see for yourself.  It has not missed.  However, for the first time in history most of the world is on the same part of the cycle at the same time.

To give you a quick look at the cycle through the eyes of American history, let’s go through this saeculum four (4) times.

You will notice that most of the time in history these turnings last about 20 to 25 years.  So now you can see it, but what do you do?  It is easy to see that we are in it, the Winter of our Discontent, so to speak.  Do you know what to do in a Fourth Turning?  Do you know how to change your thinking and your life to be a positive catalyst for the change you want to see?  For 14 Points to Survive in a Fourth Turning click here.

The 4th Turning has many aspects to it as well, but we’ll save that for a future post.  Suffice it to say, the 4th turning is when the greatest changes can happen.  But you must be educated in what freedom looks like.  You must have the tools (books) and know how to use them to create freedom around you.

It will take courage.  It will take determination.  It will probably take a miracle or two.  Nevertheless, as in times past, Providence has been on the side of freedom.

For the next post on this subject click here and take a closer look at just the Winter or Crisis in this turning.  Ask questions and comment on this post.  We are all in this together.  FREEDOM CAN WIN!