The 9.12 march on Washington was a wonderful, peaceful event.  I had many emotions while I was there.

We drove into Maryland on Friday night before the March.  There were activities planned as early as Thursday, but our family opted to spend the time seeing other places, like the Freedom Trail in Boston, that I wrote about earlier.   We stayed at a KOA on Friday night and ran into a few people in the KOA store, all who were planning on attending the march.  There were three ladies from Florida, who drove up.  There was an elderly gentlemen, 83 years old, who was a Veteran of our military, and his wife, who said, “This is the last thing I can do for my grandchildren, so I’m going to do it.”

We got up early on Saturday and went to the train station.  ALL of the people that I could see had signs in their hands.  The train filled with people going to the march.  As we exited the train, the underbelly of DC filled with shouts of “U S A, U S A.”  People began cheering.  The excitement was palpable.  My children joined in.  People were giving away American flags and Constitutions.  People in wheelchairs participated.  Some walked with canes.  Children in tow with parents.  I met people from Indiana, Connecticut, Maryland, Florida, Alabama, Washington, Tennessee, Texas, New York, just to name a few.  In addition, of course, we were there from Utah. 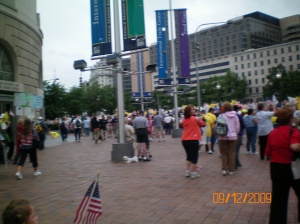 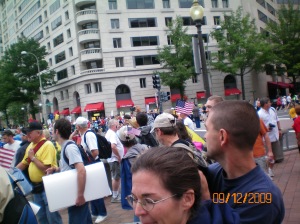 I experienced all kinds of individuals, with a wide range of ages.  Many elderly people participated.  This was no ordinary march.  We have been called angry, but I would use the word empowered.  We gained strength from each other.  We saw all the people around us who had united under 9 Principles and 12 Values. 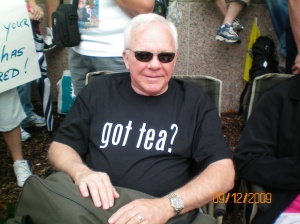 The issues ranged the gamut from ending corruption, to eliminating czars, to ending the Federal Reserve, to The Statue of Liberty in tears.  However, the main theme seemed to be restoring the Constitution to its rightful place inside our government.  Also taking a good long look at the unconstitutional things that are currently running rampant within the government bureaucracy.  Yes, there were a few who carried the “birth certificate” signs, but most are just frustrated with Congress even more than they are frustrated with the President.

I asked a few people if they affiliated themselves with a specific party.  I received answers of Republican, Independent, and Democrat.  While most seemed to come from the Republican party, they were frustrated within their own party as well.  This was by no means any type of scientific poll, just a chance meeting with the marchers as we walked.  One feeling I received was that these people are becoming informed.  They will not sit idly by while the so-called elite run their government any more.  They don’t trust them to do what’s in their best interest.  Party-lines mean very little to this group of people.  They are going to listen to the candidates, look at their record, look at their lives, and then pull the lever.  If a candidate arises that holds dear the Constitution, small government, tax-cuts, end of corruption, and will live with the same laws they enact they will be popular among this crowd, no matter the party on their sign.  These people are going to understand the issues and weigh in through the internet, twitter, facebook and other social media.  They are once again looking for statesmen.  Mr. Smith is wanted in Washington.

The mainstream media can ignore us, and it won’t matter.  The media can pretend we don’t exit, and it won’t matter.  For every single person at the march, there were likely hundreds of people back home that wanted to be there, or knew someone who went.  They know us.  They know we are real, and they trust us.  So, if the media downplays the march, they are biting the hands that feed them, because the people who weren’t totally sold on the media bias, now have proof in their friends and neighbors that they were there and were ignored.  Their friends, who are not racists, tell them how peaceful it was, and the media said they were an angry, racist mob.  Their friends tell them about the wonderful democrats and independents they met, and the media says it was a GOP stunt.  Their friends tell them about the people from all races who attended and are standing for the Constitution and running for office, and the media says it was a white-male crowd.  The media can ignore us, and they will soon find they are the ones ignored.  Their only hope will be to ask for a government bailout that Congress had better think twice about giving.  As a friend of mine tweeted, after lamenting at the lack of coverage, her son told her, “Don’t worry, mom, ABC didn’t report on the Revolution either.” 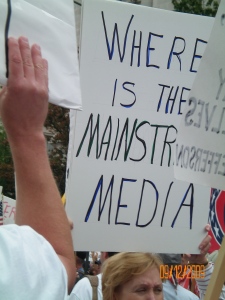 We gathered in the Federal Triangle on Pennsylvania Avenue at about 9:00.  We walked around for an hour.  There were people with speakers and microphones giving pep-talks.  There was only one camera that I saw, and I’m not sure if it was even anyone from a media station.  As people continued to get off the trains, the area became so overcrowded you could barely move.  One girl saw us with our little children and tears streamed down her face.  She reached down and said to my daughter, “I’m so glad you are here.  Don’t ever forget this.” 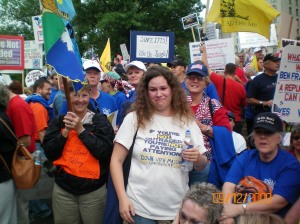 We walked quite a distance both directions and never found the ends of the crowd.  At 10:00 the march began.  One person with a bullhorn strapped to him, was asking the crowd, “Why are you all so happy?  You are supposed to be an angry mob, remember?”  And it was true.  Everyone was happy.  People were signing “God Bless America,” chanting “U S A, U S A, U S A.” 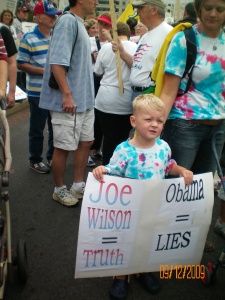 The police at the Capitol building when we got there about 20 minutes after we began, were not allowing anyone else on the lawn of the Capitol even though there was plenty of green to be seen.  We sat around the Capital Reflecting Pool, while the street continued to flow for another hour and a half to the capital.  There were individuals, who chanted things over the loud speaker, and many joined in, but the conservative group was difficult to lead.  We just aren’t the cheerleading type.  We don’t chant, because it feels strange.  Crowd mentality is not really our thing.  We are individuals that believe in individual liberty, so behaving in a crowd is not the norm for this group. 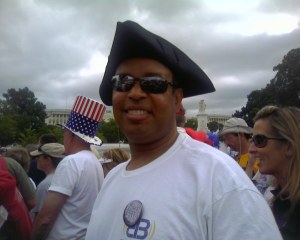 We expected more vendors available on the streets to help feed the crowds, but when that did not happen the crowd began to separate around 12:30 p.m. just to find food.  The rally took place at 1:00; many had already dispersed into other parts of DC.  This was unfortunate because the crowds were much heavier before the media (only Fox) began their coverage.

In the end, we may have gone home ignored, but the empowerment has taken root, and it will continue to grow.  We know who we are.  We will continue to educate ourselves, and we will not back down from our conservative stand.  At the 9.12 march Senator Jim DeMint said that the Republicans had lost their way.  Maybe now they have found it again.  The GOP has the right platform, but as said by Rand Paul the GOP is an empty shell.  It all depends on the people we fill it with.  If the GOP embraces this movement properly, and returns to their roots, finding statesmen instead of politicians to represent their people rather than their party, they, and all Americans will be the better for it.